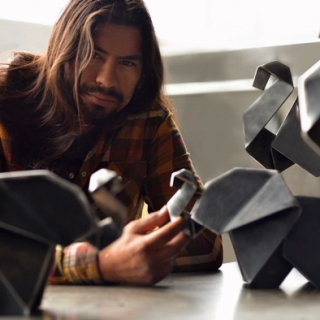 The University of La Verne will soon present Rabbit, Sitting a large scale, public sculpture by Los Angeles based artist, Hacer. As a prelude, the Campus Center has invited Hacer to exhibit these paper maquettes which provide a rare glimpse into his creative and technical process. Rabbit, Sitting playfully alludes to La Verne’s historic citrus groves where cotton tail rabbits scampered through the landscape. This giant artwork will be an unexpected delight; like seeing a rabbit or deer on a walk in the woods, there is a chance encounter that feels magical and memorable.

As a youth, Hacer entertained friends with his ability to create animal forms with origami folding. Like an improvisational performer or sleight of hand magician, his techniques and quick reflexes allowed him to alter a flat sheet of paper into an animal with distinct features. With his audience captivated, a skillful pinch, fold and flip changed the first creature into an entirely new character; his audience was amazed. Child’s play is serious business. The concept of child’s play as invention and innovation is an integral practice many artists and architects like Frank Ghery, whose crumpled paper forms, serve as the basis for his unique building structures. In their grand scale, Hacer’s rigorous metal works simultaneously embody the joy of his early three-dimensional discoveries and the sophistication of his present, highly engineered practice.